I never got caught up on last weekend but it was quite the adventure so it must be shared. I headed over to Ellensburg last Friday after work and arrived just in time to stop at Maurices, one of my fav. stores. They had some great deals so I was glad I stopped. Getting out of my car I could tell that it was pretty darn cold outside, try 12 degrees! Okay It was atleast 40 when I left Seattle, that was quite the change. So I headed over to Travis & Rachels and then we headed to the highschool for Kylee's basketball game, but not before hitting up every gas station in Ellensburg to find the right air hose to air up one of the tires on Travis's truck that was flat. As Travis said, there is always an adventure in Ellensburg :) After the game we went to dinner and then decided to go have a few drinks. It was so cold out, when we checked the temp. on Rachel's phone it said, 6 degrees but feels like -7! Now that is damn cold, but we still had a great time.
Saturday morning I was going to go to Becca's house to ride with her and Dailey down to Yakima for their brothers Logan and Landon's basketball games. Rachel was coming with me and on our way to get a Starbucks, my car freaked out. It had been to cold and apparently had completely frozen up. We didnt know that at the time, so we drove it down to Seth Motors for the time being. We had a good time in Yakima, did a little shopping, went to Logan & Landon's 1st basketball game which they won by 1 point and then went to get ready for our big banquet.
The weather was terrible to say the least. It snowed all day in Yakima and the passes all around Yakima were in rough shape. The banquet turn out was very low but we still had a lot of fun. After the banquet we went to the bar at the hotel and had drinks, watched people sing Karaoke and just had a great time.
We figured out on Sunday that my car wasnt going to be fixed until Monday so we just hung out at Travis and Rachel's, I made dinner, Rachel waxed my eyebrows and then we just watched tv.
Monday Travis got up and took my keys to Justin to get my car fixed and then later on Travis, Zach and Brandon came to get me for lunch and after we were done, my car was ready! I was so glad because it was starting to snow again and the passes were going to get nasty. Basically my car had to be flushed out and have the right antifreeze put back into it so she is running well for now :)
Im so glad that I have such great friends in Travis & Rachel. They are the most caring people and I am so thankful for them. I always have so much fun with them and I feel like I am truly cared about by them.
Here are some pictures from last weekend and this week since I havent been very good about pictures lately! 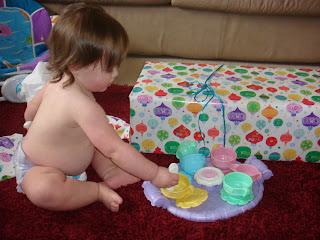 Dailey "stirring" her tea in her new tea set :) 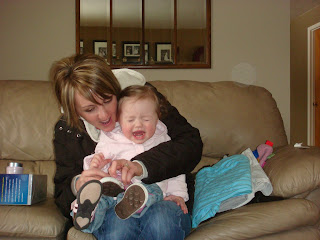 Dailey getting her shoes changed by Auntie and apparently she didnt want that :) 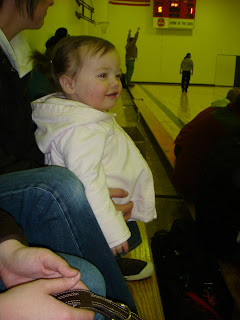 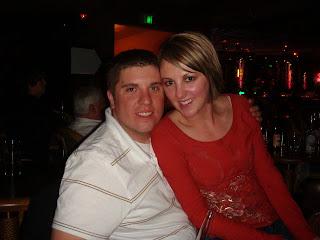 Travis and Rachel after the banquet. 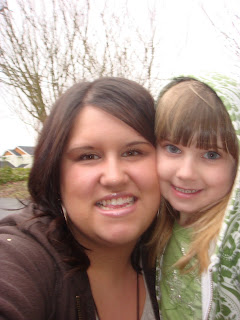 Campbell and I playin around after school one day.