I usually don't post 2 blogs in one day, but this just had to be shared. 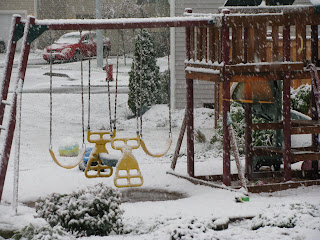 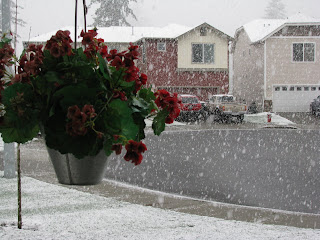 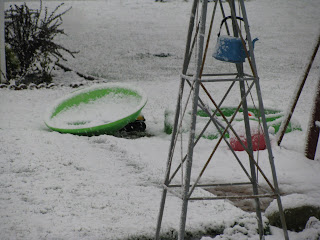 This is so crazy to me for a few reasons, mainly because it's April 18th and it's supposed to be Spring right now. Secondly, a record was just broke last weekend on April 12th for having the earliest hottest day recorded at 77 degrees in Seattle, with reports of it getting to 83 in Monroe.
And now 6 days later, we are breaking the record for the latest snow fall, which was previously April 17th, 1972.

It has been snowing like a blizzard since I first got home at 5:30, the ground is completely covered and the whole sky is socked in.

When I went to the post office around 2:30, they were playing the song "It's beginning to look a lot like Christmas"! I just busted up laughing, it was pretty funny. Then I go into Top foods, where it's supposed to be "Hawaiian week" and all the employees are dressed with their Hawaiian shirts and lays, meanwhile its a winter wonderland outside.

I'm not really complaining since I do love the snow and all, I just wish it would have came about 3 months ago..Now that I got a taste of that warm spring weather, I want it back. But the snow is beautiful to look at, so I will just enjoy it for what it is :)