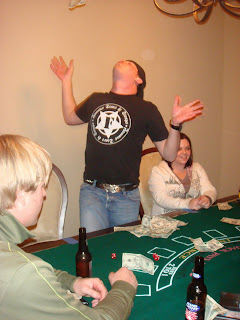 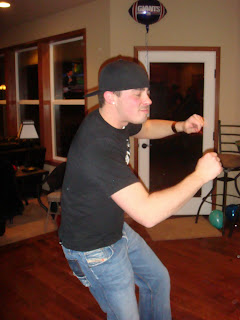 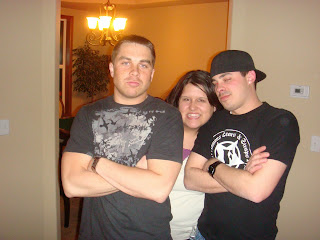 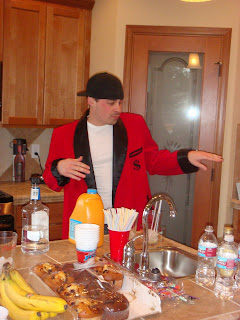 Well unfortunately the weekend is over, but it was fun while it lasted! Saturday was a busy day for me preparing things for Steven's birthday party. I am the worst procrastinator you will ever meet, that and the fact that I always think things will take less time than they actually do. You think I would learn! I got to Steven's late but luckily only his parents were there so we had a bit of time. Angie was busy finishing up some appetizers, luckily we were both late so we didnt feel too bad. The party went great. There was a great turn out and Steven had a good time. They played beer pong, the dice game 4,5,6 and even had a dance off. It was good times had by all. Steven just moved into his new house about 2 months ago and it is really nice. His parents built it and he did a great job decorating it.

We woke up Sunday morning and when we all got moving we went to a bar down the street for breakfast. Everyone ordered drinks but I just couldnt do it. 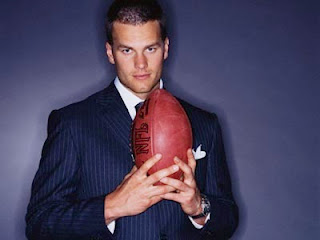 We headed back to Steven's and got ready to watch the Superbowl...I didnt really know much about either team, but I was going for New England because Im in love with Tom Brady. I was impressed that the Giants won since New England was undefeated and Im usually a fan of the underdog, but Tom Brady is just too lovely to not cheer for. All I gotta say is, Im a fan :)

After the game, I packed up my things and headed home. I stopped in Puyallup to see some of my favorite people, Mike, Susi and Jay. We watched some tv and chatted and then I headed home. I was so tired, I fell right asleep!

I'm thinking the writers strike needs to end soon. There is nothing on tv anymore! Tonight I watched my favorite movie, Wedding Crashers, which wasn't all too bad but I would like to see some new shows. I finally uploaded some of my scrapbook pages onto twopeasinabucket.com and tomorrow I hope to finish up some Valentine's Day projects I've been working on. I took a nap when I got home from work, but I'm still tired so off to bed I go!