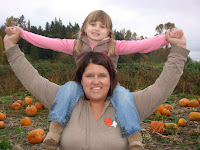 Monday we did our yearly trip to Craven Farms to pick out our pumpkins. Campbell, Michael, Ashley, Chelsea and myself went and had lots of fun.
Michael and Campbell both got pumpkins, pretty big ones at that. Michael had fun trying to load them in the wagon :) 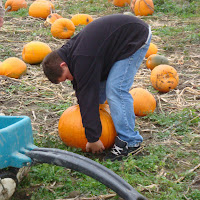 We took lots of pictures, laughed a lot and looked at the animals. We had a fun day :) 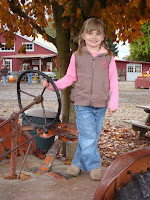 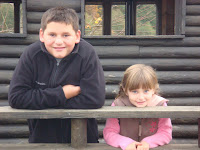 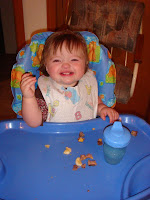 Well I dont think she could possibly be any cuter! Dailey turned 1 on October 27th and her party was at Justin's parents house in Ellensburg. Lots of family turned out along with a few friends and Dailey was so excited to see everyone. She is such a people person!
Justin BBQ'ed hamburgers and hotdogs for everyone and then Dailey started opening her presents. She got so many toys, I think she will definitely be busy for awhile! After that she had her butterfly cake that Pam spent so much time on! It turned our really good. It was so cute because at first she would just poke the cake, not too sure if she could just dig in, but with a little encouragement she was taking handfuls of it. She ate some herself but spent lots of time trying to feed everyone :) 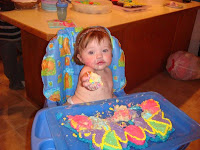 After cake, Dailey crawled around and checked out her new toys and her new chair from Auntie. She is such a little sweetie and I cant believe she is already a year old. I cant wait to watch her grown even more, she is definitely a special little girl to me :) 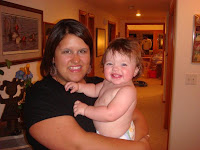 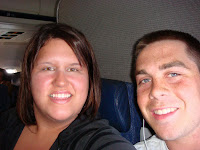 Well Jay and I are back from our trip and we had a GREAT time! I've wanted to go back to North Carolina now for quite some time, and even thought about moving there so it was great to go and check it all out. We left Seattle Friday the 19th and got to Charlotte late that night. The airline lost our luggage but we made the best with what we had.

The first night we went with Jenn and some of her friends to a piano bar called Jokers. It was a good time, but after a long day of travel Jay and I were both tired. We left there and went to the Waffle House for our first North Carolinan experience and Jay met some interesting friends :) 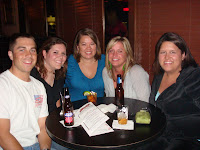 Saturday morning we were up early to head to Martinsville for the truck race. Jenn got us garage passes so we got to go down there and check everything out up close. It is always so much different being able to go down there and see the cars/drivers and crew up close rather than just sitting in the stands. We got there right in time for Cup practice and by the end of that, we were almost deaf so I decided to go rent a headset so that I could listen to Denny Hamlin and Kyle Busch during the race. I really enjoyed that, Kyle was really funny on the radio.
After the race, we headed back to Charlotte which is about a 2 hour drive. We stopped in Winston Salem at a nice Steakhouse and enjoyed Filet Mignon on the patio outside. During our dinner, there was a table of about 30 choir members and they broke out singing a prayer before their meal. I have never seen that done before but it was actually really cool, they all sounded great and it was just a neat thing to me. 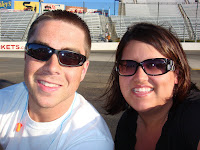 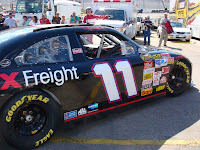 Saturday night we headed "up town" to go out. We did a bar crawl and went to 3 different bars, all of them were very fun. We laughed, had drinks and danced the night away. 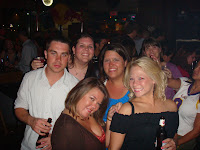 Sunday was our big trip to Asheville, about 2 hours from Charlotte. It was a very pretty drive up to the mountains with all the leaves changing colors. We went to the Biltmore house and it was absolutely amazing. It was built by the Vanderbilt family in the 1890's and sits on 8,000 acres. It has 34 bedrooms, 43 bathrooms, a bowling alley and swimming pool just to name a few things. The tour of the home took and hour and a half and was really neat. 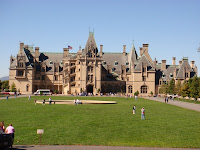 After the tour of the home we had lunch at a resturaunt on the grounds, did a little shopping and then headed to the Biltmore Winery. We got to do a tour of the winery and taste many great wines. Im so glad we were able to go there, it was a lot of fun.

Sunday night we went to Kevin and Mandi Hamlin's new house and got the tour. We got to see the babys room which will be occupied in about 3 weeks :) We went to dinner with them and then headed home for the night, we were all pretty tired. 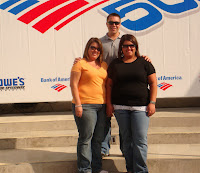 Monday we did a tour of Lowe's motorspeedway, and went to Hendrick's shop. After that we met Kev at the Ganassi shop and he took us for a tour inside the shop. That was pretty cool because we got to see all the cars up close and the haulers and just see how their operation worked. Monday night, Jay took part in a charity event for Shane "Shakes" Hakes, who was a former crew member for Burney Lamar. "Shakes" was involved in a motorcycle accident 3 months ago and is still in critical condition so the PR girls from Kevin Harvick Inc. set up the go kart event. Kevin was there and so was Burney along with Aric Amorola, Steven Leicht, Brad Parrott and several other crew members. It was a great event and Burney ended up getting 2nd in the main event. Lots of money was raised for a good cause.

Tuesday was a fun day, we started out going to Gibbs racing and that was a pretty cool shop. Since thats where Denny Hamlin is housed, I had a good time in the gift shop getting some new stuff :)
After that we had lunch at Lancasters BBQ and then headed to the Penske shop which was unreal. Definitely the nicest and most fan friendly shop we went to. There was a sky walk the length of the building where you could over look the cars and crew guys working on them. It was pretty neat to see and amazing at how much money is spent! 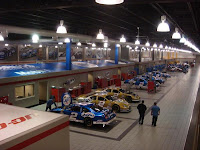 After that we went to DEI and seen their museum, kind of a bummer that the shop wasnt visible. We left there and went to Waltrip World where Jenn's friend Chris worked. He took us on a tour of the shop and we got to see it all, it was pretty cool.
We did a little shopping at the Birkdale Village and then headed home to get ready for our dinner at Red Rock's with The Roebucks. The meals at Red Rocks are all named after drivers and of course I had to get the Denny Hamlin plate :) It was great to see Sam, Heather and the kids. I sat by Emily and got to meet her doll too, we had a really good dinner and Im so glad we got to spend some time with them! 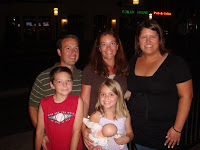 After dinner, Jay, Jenn, Lynsday and I headed to the Rusty Rudder, a bar on Lake Norman where people hang out on Tuesday nights. I had heard Denny Hamlin hangs out there so of course we had to go. Sure enough he showed up and I was freaking out :) I didnt bother him but it was cool that he was there. We had lots of fun there on our last night in Charlotte.
Wednesday we got up and went to lunch at Bojangles and then drove to Mooresville to check out a racing parts store and go to the NC Auto Racing Hall of Fame.
We also went to Roush and Wood Brothers racing and then headed back to the house to pack our stuff. 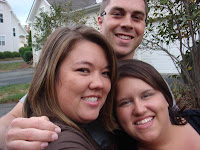 Our plane was delayed in Charlotte which made us miss our connecting flight in Cinncinati so we were stuck there over night. The airline provided us with a hotel room so we spent the evening at a little bar called Average Joe's. At that point we both just wanted to get home but we made the best of it.

Overall we had the best time ever and cant wait until we can go back again. Jennifer was so great to us and really showed us a good time. THANK YOU JENN :)

Well I am a little late in writing this but I didnt want to leave it out. The 20th annual Fall Classic was last weekend and after being rained out the week before it was very anticipated. Travis had a great car, as the 52 late model always is. It's so fun to go to the racetrack and have everyone be so confident with the car, it just makes things go so smoothly.
I got to sit up in the stands with the whole Bennett family, and seen my favorite little Dailey. She is getting so big!

It was so fun to watch her play with Jim and Pam. She still loves to have her picture taken and then review it on the screen :)

On Saturday, Susi and I spent the morning making a shirt for Travis. It all went back to Stateline and a story that Susi had told me and then I repeated to Travis, who just thought it was hilarious. 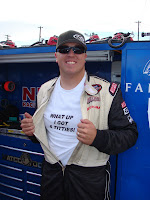 This might not make sense to everyone, but it is hilarious to us :)

Travis ran a great race and ended up finishing 3rd. It was a long 200 laps but it was a great race. I know he wants that Fall Classic win so bad, and it will come just like the other wins have..theres always next year! :)

Well the sunny days are over in Western Washington. The last several days have been very stormy. Really black skies, lots of rain and a few thunder showers. Today Campbell and I started the countdown to halloween with our pumpkin chalk boards. 26 days until the big day. She tried on her costume tonight and she looked so cute! (of course) :) 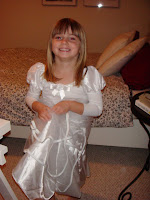 At target tonight I tried to get her the American Idol costume but she just kept saying she wanted to wear her dress, however we did get a new treat bucket featuring lightning McQueen. So the dress and lightning McQueen it is :)