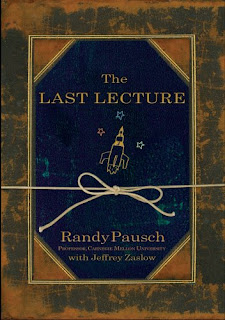 "We cannot change the cards we are dealt, just how we play the hand.” — Randy Pausch

I first learned of Randy Pausch when he appeared on Oprah several months ago. His story quickly inspired me and I was hooked. He was a father of 3 young children who had been diagnosed with terminal cancer and given only months to live. Randy was also a professor at Carnegie Mellon and was asked to give a speech as if it were his last. Since he had just found out that he didn't have much longer to live, he focused the book around chasing your dreams. He included many short stories from his life to give everyone, most importantly his children, an idea of what kind of person he was. After reading the book, it's pretty clear what an extraordinary person Randy was. Unfortunately he passed away in July, but his legacy will live on forever.
The video of his lecture has spread all across the country inspiring all who see it. His book was the kind of book that I read in 3 days because I could not put it down. Rachel was reading it with me on the plane to Vegas, and now I have passed the book on to her. I would highly recommend reading this book. It will open your eyes to how simple life can really be when you don't worry about the little things.