I have always been a Black Friday shopper for as long as I can remember. In fact, I consider it a holiday. One of my favorite holidays :) Last year I spent Thanksgiving in Ellensburg with the Bennett's and the next morning, Rachel, Becca and I left at 3am for Yakima to get our shop on. They were hooked and we decided it would be a yearly tradition. We have been so excited for it since last year. We talk about it often and were literally counting down the days. I laughed many times that getting up so early, standing in LONG lines and dealing with some crazy people, was something we actually chose to do and were excited to do, but it is so much fun. To me, it kicks off the holiday season and of course there are many great deals to score.
Once again I spent Thanksgiving with the Bennett's which was such a special day in and of itself. We had so much fun cooking, laughing and celebrating the biggest blessing of the year, baby Addi. Truly an angel that makes me so grateful and makes me believe in happy endings.
After dinner, we looked through the ads for hours and made our lists. The alarm clock was set for 2:30 which came awfully quick. We were so excited to get up and on the road. Our first stop was Target where we stood in line for over an hour and almost had some words with a lady that seemed to think that we were all just standing in line for the heck of it :) After Target we headed to Old Navy, Famous Footwear and the mall. We dropped our first load of goodies off at Rachel's and headed on down the road to pick up Rachel's friend Amy and then we were off to Bellevue. We stopped at the Outlets in North Bend first and then continued on to Bellevue where we checked into our hotel. We stayed at the Hyatt which was super nice! We had reservations at PF Changs where we had the perfect window seat to watch the 1st night of the Christmas Parade.
After dinner we shopped some more, until the mall closed and then we headed back to our room where we all couldn't wait to sleep! Saturday morning we stopped at a few stores and then headed back to Ellensburg. We had so much fun, literally laughing until we cried many times, making many memories and I think we are all counting down the days until next year :) I ♥ Traditions. 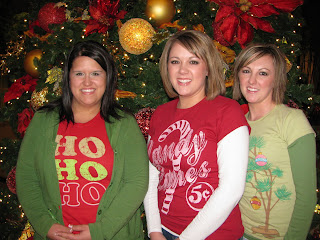 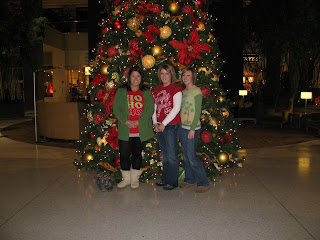 This will not be a typical week as it is Thanksgiving, and I will be heading out of town Wednesday morning.
Monday:
Beef Stroganoff
Corn
French Bread
Tuesday:
Meat loaf
Au gratin Potatoes
Green Beans

Apparently I have missed the buzz in the blogging world about the "12 weeks of Christmas cookies" challenge that some are doing. I stumbled upon it while checking out this sweet little blog and I thought, I would love to do that! Only one little problem, it is already only 6 weeks until Christmas. So, I guess I will just have to double up and try 2 new recipes a week for the next 6 weeks. The idea was to make a new cookie each week until Christmas. Since I usually have a few baking extravaganza's during the Holiday's, I would love to test new recipes that could potentially be added to my holiday favorites.
Here is Recipe #1. I picked this one for my first recipe because it's unlike anything that I usually make and it had eggnog & rum in it..done deal.
Eggnog Meltaways. 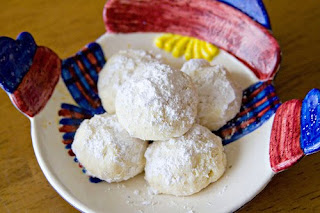 In a large bowl, cream together the butter and sugar. Beat in the rum and eggnog.

Add in the flour mixture gradually until well-combined. Cover and refrigerate the dough an hour or until firm.

Preheat the oven to 350 degrees and line two baking sheets with parchment paper. Roll the dough into 1″ balls and place on the baking sheets about 1″ apart.

Bake 12-14 minutes. Remove to a wire rack to cool about 5 minutes before rolling the cookies in the sugar. Makes about 3 dozen cookies. 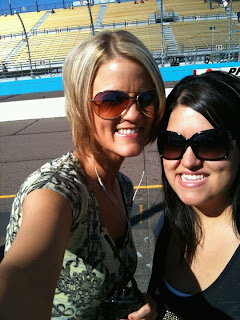 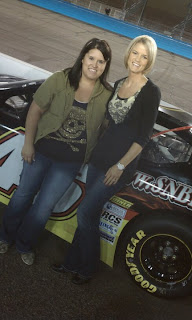 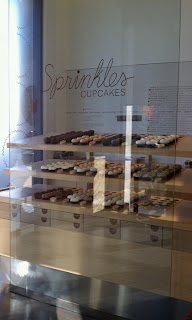 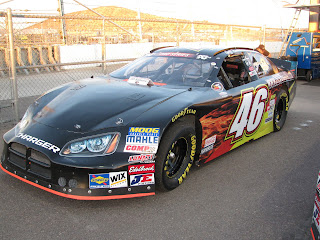 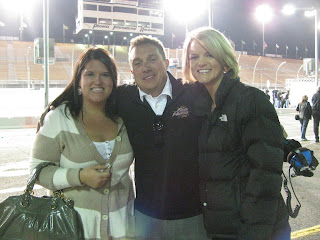 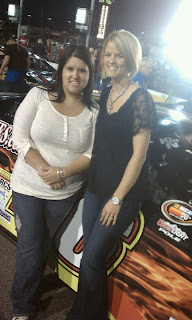 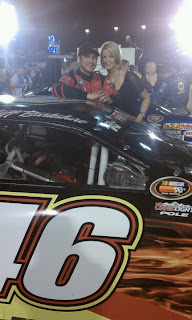 I had the best time going to Phoenix with The Barkshire's. I was so excited that Jeff was able to race this particular race since it is on Cup weekend and I love going to Phoenix. This weekend really reminded me how much I do love racing and love being at the race track. I was telling Shelby that it's kind of funny because I watch racing so much on TV, that when I see the drivers and crew members at the track, I feel like I know them because they are so familiar to me..then I have to remind myself that I don't in fact know them :)
The West series was scheduled to race Saturday night after the Nationwide race to bring more exposure to the series. I'm not sure how I feel about that since it didn't seem like the pro's out weighed the cons of the weekend, like the crazy down time. It was the ultimate Nascar style "sit & wait" weekend. And the race didn't turn out well for Jeff, when another car made contact with him forcing him into the front stretch wall and blowing out the right front tire while running 8th. Obviously not the outcome any one hoped for, but as they say, that's the way it goes sometimes. It was so disappointing after all the hard work it took by Jeff to get the funds secured to even be there and all the hard work that it took from he & his crew to be there.
While in Phoenix, Shelby & I spent Friday in Scottsdale doing some shopping at the Fashion Square Mall. They have pretty much every store! We had lunch at my favorite place there, Olive & Ivy and made a quick stop at Sprinkles for a cupcake. We went to the truck race on Friday night and watched from the pits which was fun and afterwards we got to meet one of our favorite people on Twitter: @Mother_Function aka Josh, Kevin Harvick Inc. employee and Kevin's better half. He was super funny and nice.
The weather was wonderful, the racing was pretty good minus Jeff's incident and we all can't wait to do it again..hopefully sooner than later. 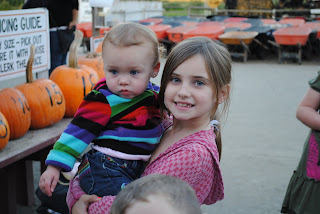 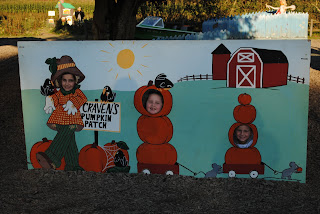 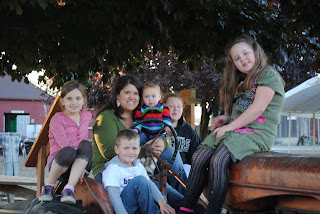 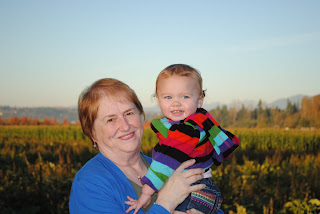 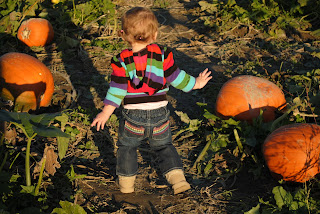 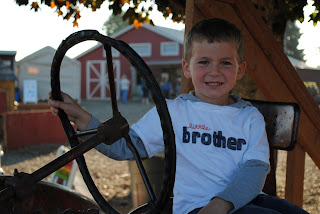 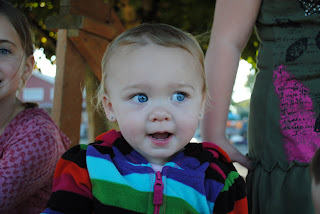 The day before we went to Craven Farms, I got my new camera and I couldn't wait to use it! I know nothing about it, but I figure that I will learn as I use it. We couldn't have asked for more perfect weather! I brought Campbell & Cooper, Lizzie and our neighbor Erica and my Sister brought Ava along. Our Grandma Chouinard also came with us and I think she really enjoyed seeing Ava run through the patch. We got to go on a Hayride, and then pick out our pumpkins and afterwards the kids visited the animals in the petting zoo. I love going to the pumpkin patch, it's a tradition that I look forward to every year! 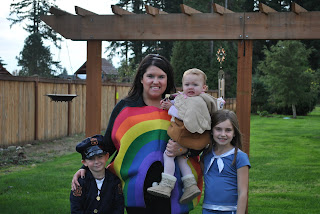 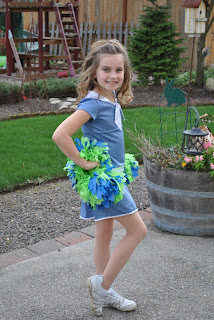 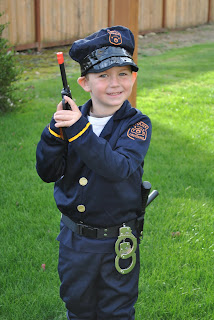 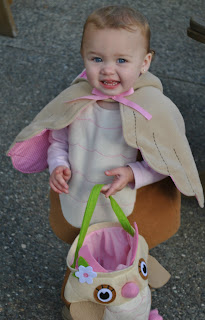 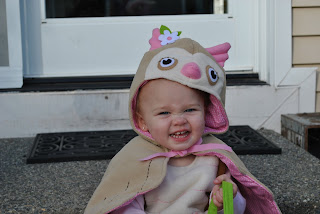 For the past several years, I have been gone on Halloween, but not this year. I was so excited to be home for it and to be able to see all the kids in their costumes. Growing up in my family, Halloween was always a big deal. We always had Chili on Halloween, our whole family came over and usually lots of our friends and it was something we looked forward to every year.
This year I had Dailey's birthday party on Saturday which was a costume party so I already had my costume and decided to wear it all day on Halloween too. I went to pick up Ava with it on and She didn't know what to think :) The kids were so excited. Cooper was a Cop and couldn't wait to put his costume on and play outside in it pretending to get bad guys! Campbell decided to be a Sea Gal Cheerleader since she already had the costume from cheering this summer. She looked so cute in it ofcourse, even though she was too shy to do any cheers or cute poses for us.
I passed out the candy to all the trick or treaters and I loved seeing their reactions when I opened the door. I think I caught all of them off guard because I didn't hear many "trick or treat's" it was more like "I love your costume!" or "wow, your a rainbow" was my favorite from a sweet little boy. I think I enjoyed it more than the kids did and I was bummed when we got our last spurt of kids. I can't wait until next year!!
The best costume for the night, by far, was our 5 year old neighbor boy Kyan, as the Mad Hatter from Alice in Wonderland. So creative and authentic! Loved it. 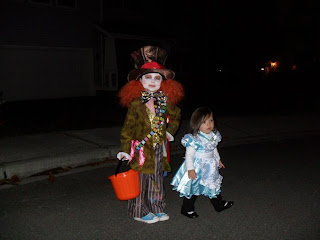