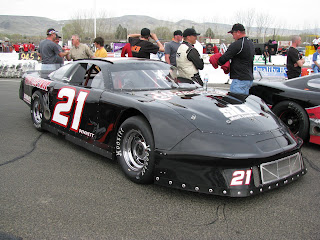 Ahh the Apple Cup, the first race of the season..that can mean several things. Excitement, anticipation, nerves, hot tempers..you name it. I was so excited for this race. Finally a real live race with people I know.

Travis qualified 4th for the main event and then had to do a 25 lap qualifying race Saturday afternoon. He took the lead on lap 2 and lead the rest of the time, until a starter came off of some one's car on lap 21 and Travis and another car ran it over. A piece of the starter flew up and hit the flagman which was a very scary thing. The race was red flagged and they got the flagman to the hospital where he was stitched up and sent home with some meds so the good news is, he will be okay. During the red flag, Travis's car caught fire because when he ran over the starter, it tore his oil line. That was scary, but he got out quick and they got the fire out thank goodness!

Unfortunately that meant he would have to start last for the main event on Sunday since he wouldn't be able to finish the heat race.

It was pretty warm in Yakima and I got a nice little burn, although not as bad as some people were! The overcast conditions Sunday is what got me.
Travis started last in the race and had an excellent car. He had no problem passing cars on the inside or outside and he made his way up to the top 5 pretty quickly. There was a break at halfway where they made some adjustments and then he was good to go. He got a few more positions and ended up finishing 3rd which was awesome! He drove the wheels off that thing and there isn't a scratch on it, really couldn't ask for more. I love watching Travis race, he always gives it his all and makes it exciting.

After the race, we went to dinner at the Outback and had a good time. Justin, Becca and Dailey came too so we spent a lot of time laughing at Dailey, she is just the cutest thing! She is getting so big and she says things here and there, the cutest was "lets go!". She always has a huge smile too and she loves people! She definitely loves her Auntie & Uncle and at dinner she was trying to say Uncle..so cute :)

I took a few pics of her in Trav's car before the race: 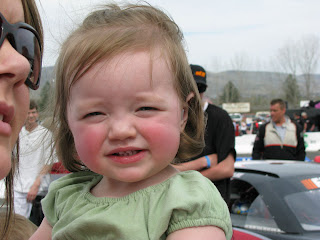 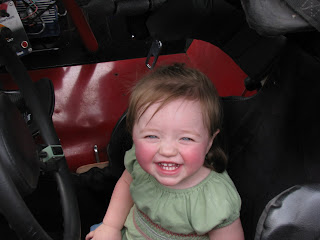