Cooper's birthday was today and to celebrate we had a BBQ for him. His cousins came over and the neighborhood kids too. The kids played baseball and played on the swing set and had a great time. Cooper had not been feeling well so he was pretty mellow and mostly just interested in drinking his water :) He was so cute though and such a big boy. I got him an electric quad and he loved it. He hasn't quite figured out how to let his thumb off the button even when he runs into something, but I'm sure he will catch on soon. He rode it all over the backyard, so cute!

It sure doesn't seem like it has been 2 years since he was born but time just flies. He has turned into such a neat little kid, he loves people, LOVES to be outside (I think he would live out there if he could) and he loves candy :) Typical little boy who loves to play in the dirt, fight with his sister and play with his trucks and trains and he sure is loved a lot! Here he is on his quad: 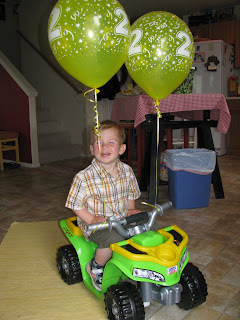 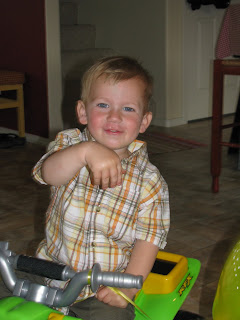