For a job well done, yet again! 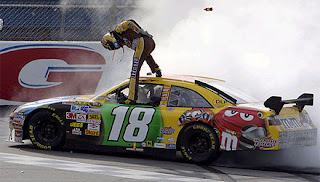 Well, Rowdy did it again! He was 8th with about 16 to go, and when I came back to the tv, he was leading with 2 to go. He was nearly wrecked by Jamie McMurray and I don't know how he saved it, but he did. He just makes racing so fun to watch and especially at Talladega. I was so excited that he won, Breanne said she knew who won before she even got to the house because she could hear me screaming :) I came outside and Melinda asked who won and I said: ROWDY!! She said, well how did he win? He was down a lap earlier in the race..I said, well because, he is just THAT good.

Karen, I will be accepting my congratulations anytime. Trace's M&M's are on their way ;)

Just another day at the office for Rowdy, and I couldn't be prouder :)