Most of you know me and know my friend Jay. He recently got a new job with Geico Insurance to be an Insurance estimator/adjuster for car accidents, etc. Part of this job required training, out of state training. So, for the past 3 weeks he has been in San Diego. He got to come home Friday night before he makes the transition to Washington D.C. where he will be until the middle of May and then he will head back to San Diego until June 13th.

Needless to say, I've missed him. I was so glad that he was able to come home for a day since at first he didn't think he was going to be able to. He called Saturday morning and said that he and his family were going to dinner at a new Japanese Steakhouse by their house and they had made a reservation including me for 5:00. I was so excited since I wasn't sure if I was going to see him while he was briefly here. After dinner he had planned that we would go to Tenino to watch the races, but we found out they had gotten rained/snowed out.

We went to the Japanese Steakhouse "Samuri's" and it was so nice. Jay and his family have went to the same place in Tacoma for the past 20 years and a guy that used to work there, opened up this new one and it was super nice! We had a great time laughing, chatting, hearing all about San Diego and having some good food too.

After dinner we headed to a bar called the Black Star and we stayed there until it closed. We had such a good time! I met some people that Jay used to work with and their girlfriends and we had so much fun chatting and laughing.

I'm so glad that we got to spend time together. Jay and his family are important people to me and we always have a good time together! 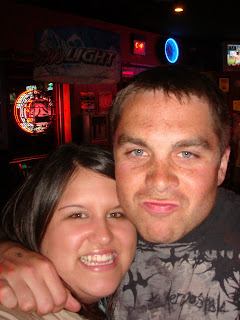 Sounds like you had a fun visit with him. I'm so glad :-)